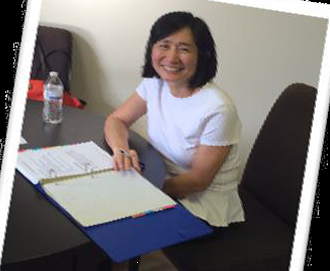 Lee is from Taiwan and her native language is Mandarin.  She has lived in the United States for 28 years.  Lee works as an account manager for a machinery company.  Lee has been in a managerial position for the last 10 -15 years and wants to be able to communicate with people better.  She said that she would like people to have a better understanding of what she says.  Lee speaks English at work and with her children but does speak Mandarin with her husband.  Lee stated that she would like to get help with her accent but also with correct pronunciation of certain words.  She finds that people often misunderstand what she is trying to say.  Lee has only had 2 sessions so far but she says after only the first session, she learned the importance of slowing down.   Lee said she wants to get more confidence when communicating with people so she doesn’t see the “puzzle in their faces.”