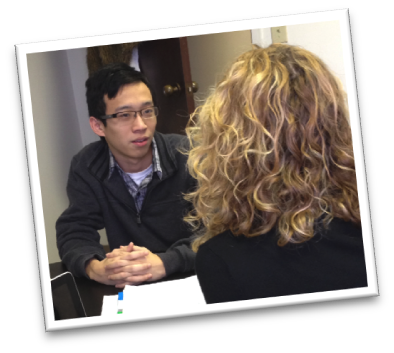 Dat is a sophomore at NC State University with a dual major in aerospace engineering and computer science and a minor in Spanish. He began his training at the beginning of August, 4 weeks before going back to school. Dat comes back to Charlotte every other weekend for his training sessions. When Dat moved here 4 years ago with his family, he said that he was much better at writing than speaking English. He said that he decided to look into accent modification because he wanted to be more articulate in the way he communicated. He realized that sometimes changing the tone of your sentence can change someone’s understanding of what you are saying. Dat said he knew that with a major in engineering, he would have a lot of presentations. He knew he would have to explain thoroughly to friends in group projects and customers in the future. Prior to signing up with Carolina Speech Services, he did some research about accent modification online. He found some books with cd’s and watched YouTube videos, but found that he wasn’t as committed. He wanted to find an actual person to help him, someone there correcting every word he said.

Dat googled accent training and accent modification in Charlotte, and on the CSS website, saw a video of our lead trainer, Lori, talking about the fact that everyone has an accent. The fact that CSS had a real person on the website distinguished us from other websites that only had written information. Dat states, “The training overall has helped in a lot of situations”. He said he has started to slow himself down while speaking and began putting on the ends of words. He said he definitely feels people understand him better this year. When asked if he would recommend CSS, Dat stated “he would definitely recommend it to everyone”!